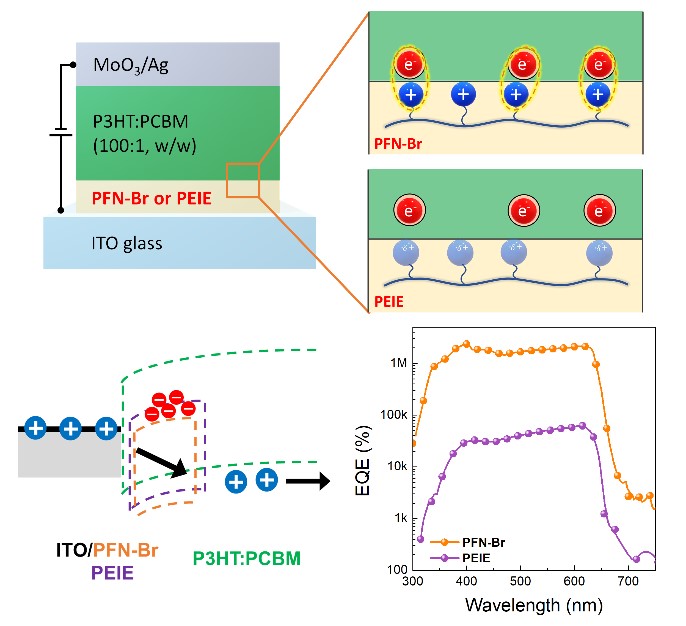 A photomultiplication-type organic photodiode (PM-OPD), where an electric double layer (EDL) is strategically embedded, is demonstrated, with an exceptionally high external quantum efficiency (EQE) of 2 210 000%, responsivity of 11 200 A W−1, specific detectivity of 2.11 × 1014 Jones, and gain–bandwidth product of 1.92 × 107 Hz, as well as high reproducibility. A polymer electrolyte, poly(9,9-bis(3′-(N,N-dimethyl)-N-ethylammoinium-propyl-2,7-fluorene)-alt-2,7-(9,9-dioctylfluorene))dibromide is employed as a work-function-modifying layer of indium tin oxide (ITO) to construct an EDL-embedded Schottky junction with p-type polymer semiconductor, poly(3-hexylthiophene-diyl), resulting in not only advantageous tuning of the work function of ITO but also an enhancement of the electron-trapping efficiency due to electrostatic interaction between exposed cations and trapped electrons within isolated acceptor domains. The effects of the EDL on the energetics of the trapped electron states and thus on the gain generation mechanism are confirmed by numerical simulations based on the drift–diffusion approximation of charge carriers. The feasibility of the fabricated high-EQE PM-OPD especially for weak light detection is demonstrated via a pixelated prototype image sensor. It is believed that this new OPD platform opens up the possibility for the ultrahigh-sensitivity organic image sensors, while maintaining the advantageous properties of organics.