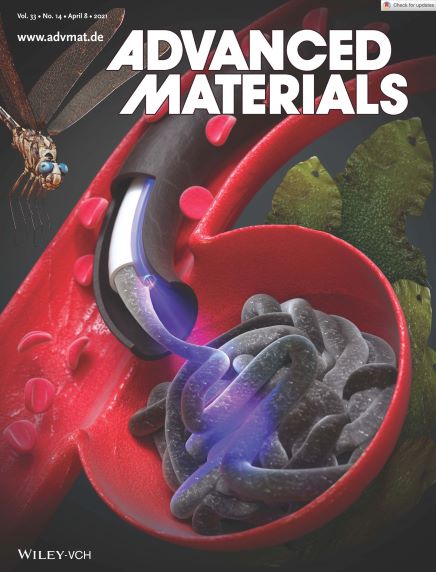 Embolization, which is a minimally invasive endovascular treatment, is a safe and effective procedure for treating vascular malformations (e.g., aneurysms). Hydrogel microfibers obtained via spatiotemporally controllable in situ photocrosslinking exhibit great potential for embolizing aneurysms. However, this process is challenging because of the absence of biocompatible and morphologically stable hydrogels and the difficulty in continuously spinning the microfibers via in situ photocrosslinking in extreme endovascular environments such as those involving a tortuous geometry and high absorbance. A double‐crosslinked alginate‐based hydrogel with tantalum nanopowder (DAT) that exploits the synergistic effect of covalent crosslinking by visible‐light irradiation and ionic crosslinking using Ca2+, which is present in the blood, is developed in this study. Furthermore, an effective strategy to design and produce an optical‐fiber‐integrated microfluidic device (OFI‐MD) that can continuously spin hydrogel microfibers via in situ photocrosslinking in extreme endovascular environments is proposed. As an embolic material, DAT exhibits promising characteristics such as radiopacity, nondissociation, nonswelling, and constant mechanical strength in blood, in addition to excellent cyto‐ and hemo‐compatibilities. Using OFI‐MD to spin DAT microfibers continuously can help fill aneurysms safely, uniformly, and completely within the endovascular simulator without generating microscopic fragments, which demonstrates its potential as an effective embolization strategy.